Updated on 22/05/2015 : Thank you Adam Cogan, for giving me some feedback on the blog, which helped improve the post.

#It felt like I’d burnt a lot of time on what should be a simple task!

This was due to the removal of automatic compiling of .less to css in Web Essentials for Visual Studio 2015 and confusion about Grunt and Gulp.

In Visual Studio 2013 (and prior versions) we used build events. In 2013 the IDE would compile less to css and use the inbuilt tools, to handle our bundling and minification. Grunt was released by Ben Alman and in 2013 Gulp was released and most non-Microsoft web developers started using either Grunt or Gulp.

In Visual Studio 2015 they have included NPM and now can do such tasks with Grunt or Gulp.

They both are task runners, which means they are both tools that can be used to add automation to a project. By having them perform repetitive tasks, such as compilation, linting & minification. Technically Gulp and Grunt achieve the same goal but there are 3 reasons you should choose Gulp:

Let’s create a simple task that will recurse through our content directory (eg. /content) and compile all the .less to .css

This JSON file is used by NPM to track dependencies. By adding a name of a package and version to this file, NPM will automatically locate, download and install the required package.

A quick rundown of how this task works:

Please note we are using the package plumber to prove error handling otherwise the process would stop at the first error.

4. Tell the Gulp task to run on every Build 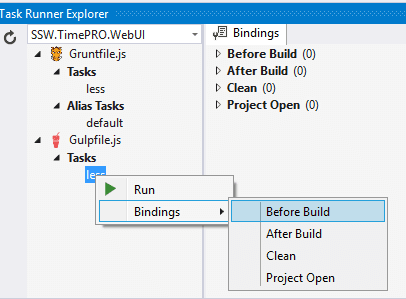 As can be seen in the image, to set when a task is run.

That was not so easy, but the pain will be worth it long term because now you can take full advantage of being able to automate trivial tasks with Gulp. For more information, you should check out this great post on bundling and minification by Jeffrey Fritz.